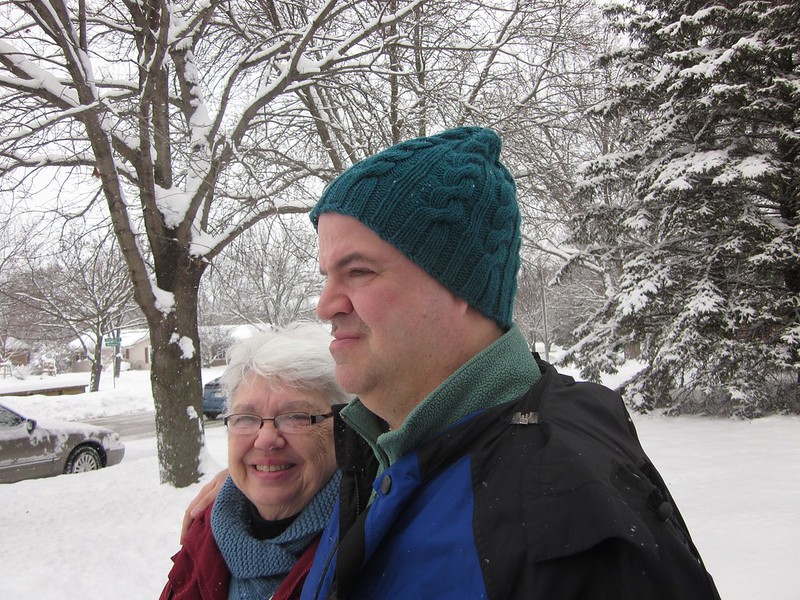 The last few months of 2012 were difficult on many levels that I won’t go into here. Things are still in a state of flux, but there is reason to think that better times are coming, but keep your fingers crossed for me for a bit, at least while you aren’t knitting or spinning. The last knitting project of the year was a resounding success, and I’ll get to that in a minute, but I did also have two flops.

I had started a blue cowl in the round on two circs to go with my new red coat. I thought the needles were the same size; I had checked them on my needle gauge. But they were two different sizes, so things weren’t turning out very well. Also turned out that I don’t have two circs of the right size. Frog.

Then I finished my vodka lemonade cardigan in the star sapphire BFL sport. I tried it on several times while knitting it top-down. All seemed to be going well. I even had a washed swatch for stitch and row gauge, and that looked good. Well, the finished sweater fits terribly; the sweater blocked oppositely to the swatch, growing rather than tightening up in gauge.

I haven’t woven in the ends because I think I may rip the whole thing some day and knit a different pattern. I’ve knit top-down before with success, but here, nothing lay or hung right.

But I did have success knitting my brother a hat for Christmas!

Mom is wearing the shawl-collared cowl I knit for her last year, which I never photographed or blogged about, and Thomas is wearing his new hat. The pattern is The Natural by Homero Luna. It’s a free pattern on Ravelry. I knit it out of some Wool of the Andes. I did one extra repeat because I tried it on M, and it wouldn’t have fit M as a beanie as written. Apparently, it would have fit Thomas, because the extra repeat adds a bit of slouch for him, which he likes.

There was a lot of snow in Wisconsin over the holidays!

He even wears the hat in public. Here Thomas is making sure Mom buys the right kind of OJ.
2013 is looking better on the knitting front so far.

I’m 90% done with a Manaan cowl in some Vintage Madelinetosh. The color is fathom, and it is a great semi-solid mix of royal and navy. Let’s hope it behaves!

Author: molecularknitting
Filed Under: Uncategorized
Birthday Treats
Before and After with Steps