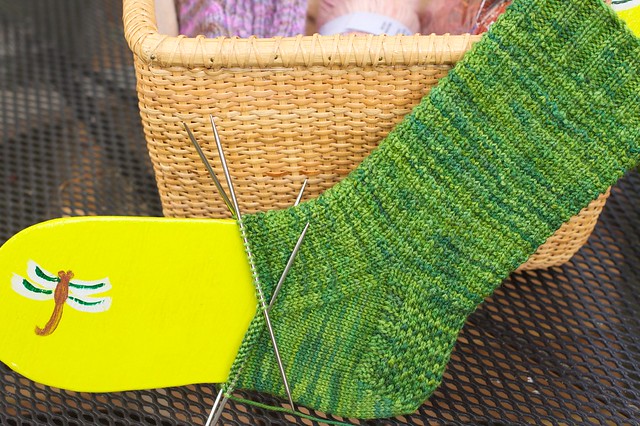 Here they are, only six weeks late:

Pattern:Rib and Cables Socks by Nancy Bush (IK,Fall 2005)
Yarn:Seacoast Panda in Truffle (merino wool and bamboo)
Mods:Whole leg is shorter than the 9″ called for in the pattern. Crossed the cables every 6th instead of every 8th round–I liked this better. Did an Eye of Partridge rather than ribbed heel flap. I did do the Welsh heel turn (fun) and the Star Toe of 3 Points (pretty, but I hate the P3togs that pile up on each other at the end).

I got bogged down knitting these; I finished the first sock in early April and then didn’t want to knit the second straight away. This makes finishing “on time” difficult. For now I’ll work on piling up some more single socks, and then make the mates a little later. To that end, I have a single sock in some green Tofutsies:

I made the cuff shorter than usual as this yarn makes a nice warm weather sock. This time round I didn’t find it splittly like I did the first time. The stitch pattern is “Arrow” from Charlene Schurch’s Sensational Knitted Socks.

Of all the other socks I had started in my last post, only one other made the cut, another green sock in the Ringwood stitch pattern from Vintage Socks by Nancy Bush. I’m just using the stitch pattern, as the sock is sized in the book for a man. I love the Happy Forest Smooshy yarn from Dream in Color.

The above have been ripped. The top left was Sockittome from CTH, and the yarn was not nice; it felt very acrylicky–even though it wasn’t. I didn’t like holding it. The top right was a design idea that turned out to look stupid, and the bottom will soon be back on the needles but in a pattern that I can do some calf shaping with.

Meanwhile, I’ve picked out patterns for these gorgeous semi-solids: BMFA STR lightweight in Rose Quartz and Sundara Sock Yarn in Ember over Flame.

You’ll just have to wait to see what the patterns are. I might jinx it if I tell you before I’ve even cast on.

Author: molecularknitting
Filed Under: socks, STR, WIPs
Back again…
Back to Blogging!

9 thoughts on “April Socks in June”