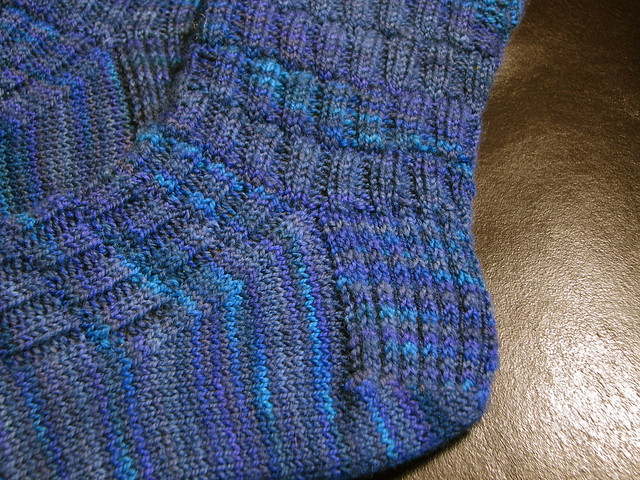 I didn’t mean to be gone so long again. Neither Archie, my laptop, nor I is having the easiest of summers. We decided to send him to Applecare right after the July 4th holiday weekend. On the second of July, M took me to after-hours care with a headache that nothing would make better. It turned out to be a “mixed” headache: both tension and migraine. 🙁 I got two shots, which made the headache go away for nearly two days, but less severe headaches keep coming back. That hasn’t made we want to do more than what I have to do for work on Archie, who seems to have fared better than I. He has a new logic board, thermal module and thermal sensor wires. He is now staying nice and cool. I wish I could get new parts like that!

Last post, I showed the finished toes of the Gentleman’s Fancy Sock from Vintage Socks by Nancy Bush. At first, I thought the Cherry Tree Hill Supersock Potluck in Blues/Purples I was using looked better in the skein than in the sock, but it grew on me. I’m quite pleased how well these turned out.

To make these for me and not a gentleman, I started at 72 stitches and decreased to 64, which I further decreased to 60 when working the gussets. I also did a slip-stitch heel flap instead of stockinette; I also did a wide toe, but I don’t know if that was part of the pattern or not (which is upstairs, and I’m lazy).

Half-way down the foot of the first sock, I realized I had changed the instep pattern to one knit row instead of two between the alternating sets of 2×2 rib. I couldn’t see a real difference, so I kept on going and did the second sock the same way. I also made sure I made these long enough before starting the toe: 1.5 inches from the total length not 2 inches, like many patterns suggest.

I liked this pattern stitch for an easy sock as it was more interesting than just 2×2 rib (doing 8 row sets of rib seemed to go faster than just measuring length), but I obviously didn’t need the pattern to keep going. I like having such a sock in progress: not too dull but not requiring a lot of mental power to stay on track. Once these were done, I didn’t feel like knitting the second Retro Rib Sock yet, so I looked for another such pattern. Luckily, Anne had just offered the Roger Sock for sale, and I knew it would look great in some BFL superwash sock yarn from Little Dog Designs. I really like the BFL yarn; it has a nice luster, and the dye job is great! The colorway is called Poseidon, and is richer than this photo suggests (it’s a billion degrees outside–I’m not going outside to photograph anything much less wool today–see lazy comment above–I am doing laundry in a 90+ degree garage).

Well, that’s enough computer time for today, as tomorrow I’ll be referencing a manuscript, which will try Archie’s and my patience to the limit. But I need to point out that M has been diligently blogging at Cocktails with M this summer! He’s had no comments. The Side Car is one of my favorite cocktails. Cheers!