All New WIPs and a Plan 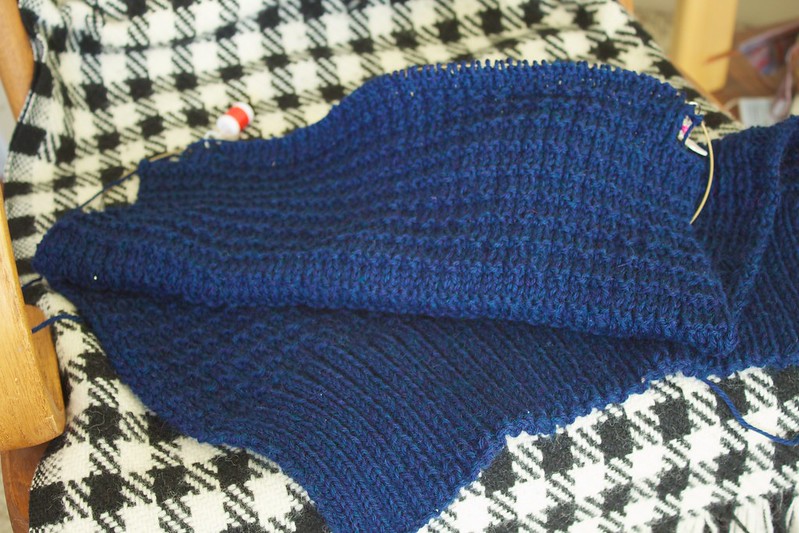 First, WordPress offered an update to my theme, so M had me install it, and then I couldn’t find the yarn picture, so I put in the pretty photo of blooming Ceanothus you see above, as it is one of my favorite native California plants. It’s called California lilac, but it isn’t related to real lilacs at all; the flowers are just blue and purple. We put a small shrub of Ceanothus in our yard. It’s about 10 inches tall and wide. It’ll be a while until I get blooms like the photo.

In knitting news, after months of mostly monogamous knitting, I finished the Manaan cowl (still waiting to be blocked and photographed), and then I went a little berserk casting on. Back in November, Kym, of Stepping Away from the Edge, showed off her progress on her Tinder cardigan, and I was smitten. Jared Flood designed Tinder, and I’ve knit a couple of his other patterns with great enjoyment and success, so I took a look at it on Ravelry. When I saw it had a stand-up collar (my hair is very short, so my neck is bare), I knew I had to knit it. Much as I want to do some knitting with Shelter, Jared’s yarn and the yarn the pattern calls for, I want even more to use up some of my stash. So I cast on in some midnight blue Cascade 220 heather, after getting gauge, and I’m almost done with the back.

Part of my plan, to keep the WIPs from getting out of hand, is to have this sweater, at least the knitting of the five main pieces, done by the end of April. That sounds like a long time, but I seldom have time to get more than three large projects done a year, so 4 months is about right.

Another part of my plan is to knit quite a few hats this year for myself, my brother Thomas and M. I thought I had 1-2 skeins of Lamb’s Pride Bulky left over in raspberry from knitting a vest. So I thought I’d knit a hat. I have 8 skeins left. More than a hat. A chill in the room, a determination to use up some yarn that has been sitting around for ages, and the opportunity to start right in without a swatch, had me casting on for a Unique Melody wrap by Rose Beck.

It’s knit on the bias, and I stopped expanding the candle flame motif at four. Now I can knit until I have a little over one skein left and then decrease back down to a point. It’s an easy knit, the single ply yarn works well in the candle flame pattern, and it will be snuggly. We’ll see how long it gets, but I should at least be able to wrap it around my shoulders and pin it in front.

Then, when going out, I put on a loden green Geiger (Austrian boiled wool) jacket my mom had given me. Her mom had given it to her years ago, and my mom didn’t really wear it. It appears new. For our winter climate here, it is the perfect weight for a sunny, winter day. And I happened to have some very old, beautiful, but hard to knit with, multi-colored, single-ply, thick-and-thin yarn (basically all the characteristics of yarn that attract a newbie knitter but drive an experienced knitter crazy). The green in the yarn was a good match with the jacket, being just a shade lighter “on the paint chip.” I cast on a feather and fan scarf using the recipe by Jo Sharp in Scarf Style for Misty Garden. It’s going to be a keeper because I refuse to rip this yarn ever again. I have 300 yd, and then I’m done. And I shall never buy a multi-colored, thick-and-thin, single-ply yarn again. You can quote me on that.

Finally, I cast on a failure. I love the Pinctada cowl by Angela Button of stringkitty, but it absolutely does not work in this Wagtail 100% mohair yarn (the green is part of a provisional cast-on).

The yarn has NO bounce or elasticity–not surprising being mohair. It’s so soft and pretty-shiny even-but hell to knit with. But I’m determined I’ll find a way to use it. I have an idea, but that will be another post.
So there you have it. Three new WIPs to become FOs, and one to be ripped. But I do plan to knit at least three large projects this year, AND to use up some of my smaller amounts of stashed yarn, especially knitting hats.

Author: molecularknitting
Filed Under: Uncategorized
Before and After with Steps
Green Hat, Greens, and Spring Flowers

8 thoughts on “All New WIPs and a Plan”